Some say that it’s boring watching people grow old, but just wait until you have to do it! This old bird does it with wit and charm.
Inspired by the life of Jeanne Calment, documented to be the world’s oldest living person. She was born in Arles, France in 1875 and died in 1997 at 122 years of age.
As did the real woman, the Jeanne of THE OLD BIRD claimed to have met Van Gogh, among others. She sold her apartment in a “reverse mortgage” but managed to outlive the “deal.” Iconoclast that she was, she refused to sit back in a nursing home rocker to live out her life. Instead she smoked, biked, swam and ate her daily sweets. In this fiction, Jeanne savors the improvised friendships of those she meets along the way—a fictional niece, realtor, and reconjured “acheteur d’appartment,” the man who bought her apartment.
In a larger sense Jeanne challenges us all to savor a full and adventuresome life. To paraphrase the living woman, “You can have sadness and troubles at any age; so for now just smile.”

SCENE FROM THE PLAY

Dezart Performs produced the play in Palm Springs in December 2011. You can view the promo material on You Tube at:
http://www.youtube.com/watch?v=qB0ShqZEDvc&feature=related 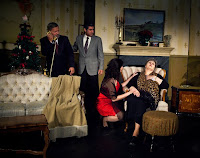 Flight of The Old Bird 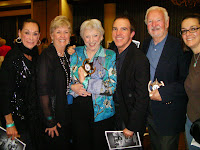 Writer/director/actor/college professor, Lynn Wells Nelson has directed over fifty productions from musicals to Shakespeare. She has adapted dozens of scripts in cooperation with authors inston Weathers, Jack Matthews, Ray Bradbury, and others. As an actor, she has played in such roles as Hedda in “Hedda Gabler” and Birdie in “The Little Foxes.”

THE ARTICULATE VOICE, her textbook, is used in colleges and universities throughout the country.